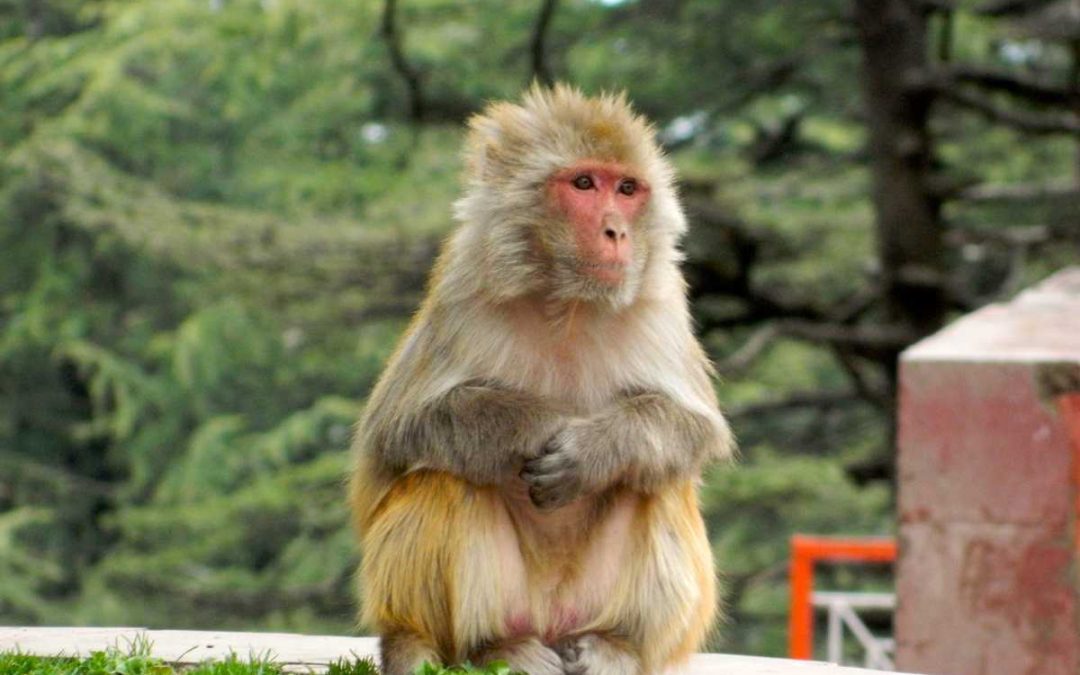 Now, if you’re anything like me, you grew up thinking that monkeys were cute. I mean, what’s not to like? They’re fluffy, with long tails to swing from trees, plus they have tiny hands just like ours, but on their feet. They tick every box.

Then I started travelling. To be fair to monkeys, they probably are cute, deep down. The trouble is that we have invaded their space, turned their world upside down and provided a shiny new land of opportunity, free food and all the luxury items they could possibly lay their hands on.

Initially, I gave them the benefit of the doubt. I mean, they can’t be THAT bad, right? Just stay away from them and they’ll leave you alone. Well, not exactly. If you don’t believe me, wander through an Indian market with food in your hand. Or maybe put your phone down on that ledge over there while you dig your camera out of your bag. Fresh samosa, expensive phone, gone before you can blink.

My worst experience of this was at the Jakhu Temple, more commonly known as the Monkey Temple, Shimla. Shimla is in the foothills of the Himalayas in northern India, and was the summer capital of the British Raj, up where the air is cool. By definition, it is hilly, and we were told about a temple to the god Hanuman which is built on top of one of the surrounding hills, reputed to be one of the best places to visit near Shimla. Hanuman has a face like a monkey (for more, read the Ramayana, although it may take you a while). I don’t know whether this is a coincidence, but the temple is more than usually renowned for its monkeys.

One of the cheeky residents of the Shimla Monkey Temple

“Don’t take food”, we were told, so we dutifully left the snacks at the hotel and set off in a taxi, intending to walk back. The first warning bells came when we arrived at the temple and were told by several people to take off our glasses. Now, I am very short-sighted, and without my glasses I would pretty much have to sit on the temple steps and wait for the group to return, because it would be pointless visiting a temple I can’t actually see. A couple of my companions were in the same boat, so we shrugged off the warnings and proceeded, albeit with caution.

Well, the temple was great – extravagant colours, interesting decorations, and more monkeys than you can shake a stick at. But our problems began as we left. As our group exited the temple, there was a cry from one of the men, followed by the sight of a monkey bounding away into the undergrowth waving his spectacles. A nearby local, who had obviously done this before, immediately charged after him, tackling him and retrieving the glasses, and earning himself a healthy tip in the process.

No sooner had things calmed down than the rest of our group appeared, with one lady missing the glasses she had been wearing not two minutes previously. She was also sporting a nasty scratch on her face – it later required a rabies jab, and the glasses never did reappear. By this point, I was getting distinctly nervous. Mine were the only pair of glasses left in the group so, not wanting to risk them, but also not wanting to attempt a steep downhill walk back to town with blurry vision, I swapped my glasses for my prescription sunglasses and kept a firm grip. But it quickly became clear that I was getting more attention from the monkeys than a primary school teacher with a bag of sweets.

I ended up having to remove the glasses and totter back into town down a steep slope half blind, clutching a friend’s arm for dear life – and determined never to ignore a monkey warning again. If you’re looking for the top places to see in Shimla, a visit to the Monkey Temple should definitely be on your list; but heed local warnings, don’t carry food, and keep valuables under lock and key – especially if they’re on your face!

Plotting their next heist… Monkeys are popular Shimla attractions, but aren’t as cute as they seem!

Run out of things to do in Shimla and fancy heading deeper into the gorgeous state of Himachal Pradesh (with fewer monkeys!)? Check out these posts from India native Shivani at The Wandering Core!
How to spend a day in Sangla, India
Four ways to reach Sangla Valley from Delhi
Kanda Lake – A Trek from Sangla valley

Planning a trip to amazing India? Check out these posts to inspire your travels!

North and East India: What to do in almost every state
Central and Southern India: What to do in almost every state
The magic of the Ganges: Evening aarti at the Varanasi ghats
6 Incredible Reasons to visit Tamil Nadu
Amritsar: the jewel of the Punjab
Best time to visit the Taj Mahal: top tips for your visit
Dharavi slum tour: Discover the true entrepreneurs of Mumbai
Gandhi’s home state: The 12 top Gujarat highlights
Shatrunjaya: The Jain pilgrimage site of Palitana, Gujarat
Top sites you shouldn’t miss on a Kolkata day tour
5 Reasons you will love India…

Disclaimer: This post may contain affiliate links, meaning I receive a small commission if you make a purchase through links on this post. Thank you for your support, which enables me to continue producing great content!

I’m Jill, and I’m a British blogger who has been travelling for more than 15 years, visiting 70 countries on 6 continents. I love to travel both solo and with groups, and to discover the cultures and peoples of the countries I visit. And I love to share a good story or two along the way!