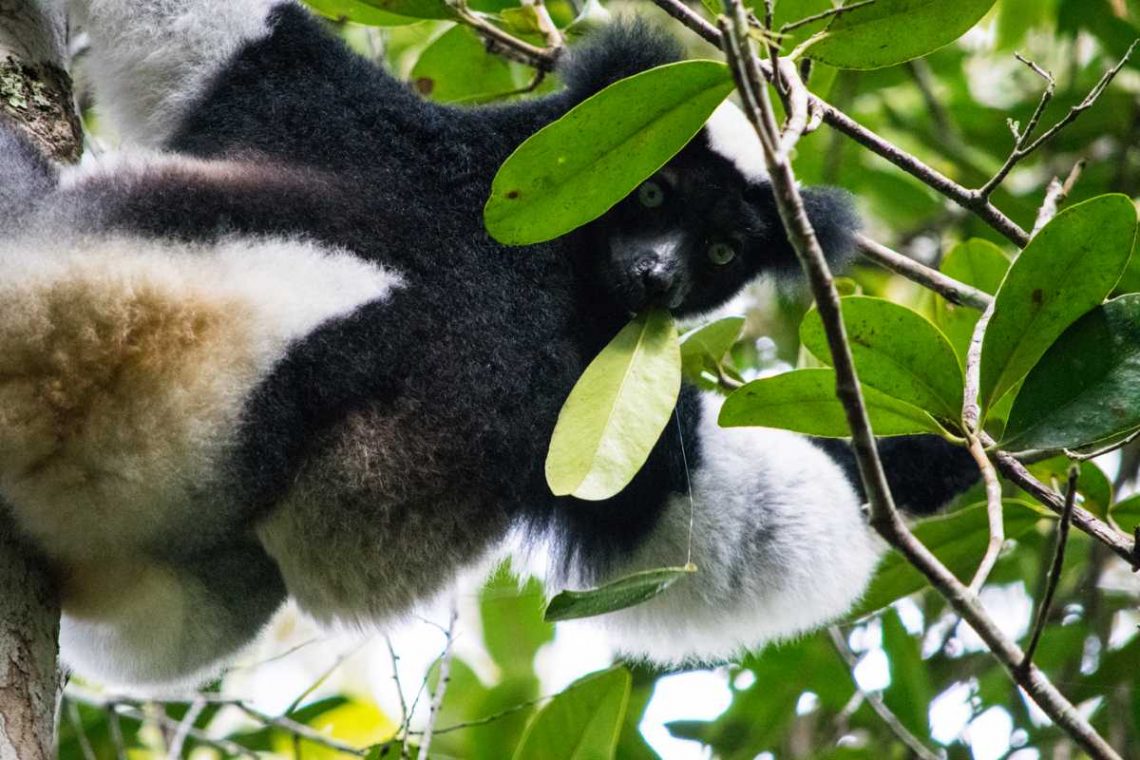 For me, one of the most rewarding things about travel is the opportunity to view and photograph wildlife I could never see at home. In this post I share some of the most memorable – and unusual – animal experiences I have had on my journeys around the globe. What has been your most exciting wildlife experience on your travels?

All the encounters in these posts were with wild animals, apart from the horses which were domesticated and well cared-for.

A trip to the island of Madagascar, lying off the coast of southeast Africa, can only mean one thing: lemurs. And the largest of these is the indri (see cover photo above).

Tree-dwelling primates, the indri live in large family groups in the treetops, jumping sideways from tree to tree on their hind legs. They are territorial, and one family will rule a specific area of the forest, where their haunting cries can be heard for miles around. A good tracker will know the local families and be able to help you find the nearest group, although it will still mean a scramble across the hillsides which is all part of the fun! Dense forest is prime indri habitat, and standing on the forest floor looking up at these creatures in the trees above you is an unforgettable experience.

Top tip: use your phone to record a short snatch of the indri’s cries. Play it back and hear them answer you!

Spinner dolphins in the Maldives

One of the highlights of cruising the Maldives is the sight of spinner dolphins, which launch themselves out of the water and pirouette gracefully before belly-flopping back in. Look out for them as you sail between islands, and then sit out on deck and admire their athleticism!

Top tip: Between bobbing boats and energetic dolphins, it’s almost impossible to get a decent photo of a spinner dolphin, so don’t try. You might manage a short video, but otherwise just sit back and enjoy the spectacle!

If you’re a fan of monkeys, you really can’t miss them in the subcontinent. Big or small, there is a huge mixture of monkey species in India, and they are everywhere. And sometimes that can present a challenge!

Indian monkeys seem to be divided into the cute and the not-so-cute. Encounter a monkey in the countryside, and chances are he will be swinging from the trees, curious of you but content to just show off for the camera. Encounter a monkey in the city, and you’d better not put that camera down anywhere or the monkey will walk off with it! But either way, their antics are incredibly photogenic.

Top tip: Don’t get too close. Once the monkey starts to feel threatened, teeth will be bared and claws will be out. A monkey scratch will land you at the nearest clinic for a rabies jab, so it’s best to err on the side of caution. But monkeys will normally leave you alone if you give them a bit of space. And don’t wave food around…

Now, I’ll be honest: komodo dragons aren’t the most dynamic of creatures. At least, not unless they are attacking, which is not a situation you want to find yourself in (and yes, the komodo dragon diet has been known to include humans). But their sheer size, toxicity and ferocity make them fascinating to see.

A trip to Komodo Island or its neighbour, Rinca, gives you the opportunity to view these creatures up close. A variety of trails of various lengths give you the chance to see them in their natural habitat, however many factors such as the time of day or year can make them hard to spot. But one place they can always be relied on to visit is the ranger station, where the wild komodos wait around for scraps of food. It may not be the wild sighting you were hoping for, but you are unlikely to leave without seeing them!

Top tip: Take a camera with a long lens. You can’t approach the komodos too closely: it’s incredibly dangerous, and your ranger guide won’t allow it anyway. To get a decent shot you will need to zoom!

The western Indian state of Gujarat is renowned for its wildlife, which includes the rare Asiatic lion. But one of its most striking inhabitants is much more peace-loving: the wild ass.

Living on the arid Little Rann of Kutch in the centre of the state, the asses – which look somewhere between a horse and a donkey – are under threat due to illegal salt-panning in this desert region. Protected by the Indian Wild Ass Sanctuary (which is not just the largest wildlife sanctuary in Gujarat, but the whole of India), the asses live in herds on the plains, and make a striking silhouette against the blue desert sky.

Top tip: To visit the wild asses, you will need to take a jeep safari into the sanctuary. Crossing the plains by open-top vehicle is part of the fun! You won’t be able to get too close to the animals, so this is another one where a zoom lens is an advantage.

A trip to Iguazu Falls, on the Brazil/Argentina border, summons up visions of thundering waterfalls and mists rising into the sub-tropical air. But the flora and fauna are also lush and mysterious here. Butterflies are everywhere, and toucans can be spotted in the trees; guinea pigs are also a common sighting. But you can’t miss the coatís.

The coati (or coatimundi) is a type of raccoon, and these cute creatures have overtaken the area around the falls, foraging through rubbish bins for food. Always check before you throw your trash in the can – there might be a sleeping coatí inside!

Top tip: Don’t feed them. Just don’t. And watch your bag, especially if there is food inside. But they are still incredibly cute!

Iceland is not particularly known for its animals, but its horses are special. Squatter and sturdier than their southern counterparts, there are two unique Icelandic horse gaits which experienced riders will enjoy trying out!

Horses can be found all over the island, and Icelandic horse treks are a popular activity for visitors. But you don’t have to be a rider to get up close; if you are lucky enough to see a horse close to the road, stop and feed it grass from the palm of your hand. Or better still, book a horse ride to explore this beautiful country the way it has been travelled for centuries.

Top tip: Keep foreign germs away from Icelandic horses. The breed is hardy, but the horses have had very little exposure to disease; as a result, it is not possible to import any other breed of horse into Iceland, and nor is it permitted to bring an Icelandic horse back once it has left the country.

OK, so I’ve already mentioned monkeys, but the proboscis monkeys of Borneo are something special. Found nowhere else but on this vast island, the proboscis monkeys tend to get overshadowed by their more famous cousin, the orangutan, but they shouldn’t be missed if you are visiting the area.

Proboscis monkeys are comical-looking creatures. The name comes from their abnormally large nose, which makes them look slightly like old men as they lounge about, whiling away the hours until it’s time to eat again. Red-faced and curious, one of the best places to see them is at the Labuk Bay Proboscis Monkey Sanctuary near Sandakan in the far north of the island. The monkeys are subject to the same threats from deforestation as the orangutans, and the sanctuary helps support the local primate community by providing food, although the monkeys live wild. They are incredible sociable and will come to with a few feet of visitors – don’t touch them though!

Top tip: Combine a visit to the Labuk Bay sanctuary with your trip to see the orangutans at Sepilok Nature Reserve in Sabah, Malaysia. Another great place to see proboscis monkeys is Bandar Seri Bagawan in tiny Brunei, where you can take a morning or afternoon boat trip to check out the local population.

Have you ever seen a lion up a tree? Unless you’ve been to specific areas around the Kenya, Uganda and Tanzania borders, chances are you haven’t. But in this part of Africa, lions have adapted to climbing trees – and seem remarkably comfortable.

If you are in Kenya, head to Lake Nakuru National Park, which is the only park in the country where these lions can be found. But keep your fingers crossed: actually seeing the lions in a tree is still a relatively rare event. I got incredibly lucky when I visited, and sat for a good half-hour watching a lion climb a tree and settle down amongst its branches for a snooze. It was one of the most special wildlife experiences I have ever had.

Top tip: If a lion is spotted, chances are yours won’t be the only vehicle to make a beeline for it. If you can, try to hang around until after most of the vehicles have left. The lions will feel much less threatened, and much more inclined to pose for the cameras. And you will get better shots as well as a magical experience!

Have you had amazing wildlife experiences on your travels? Let me know in the comments! 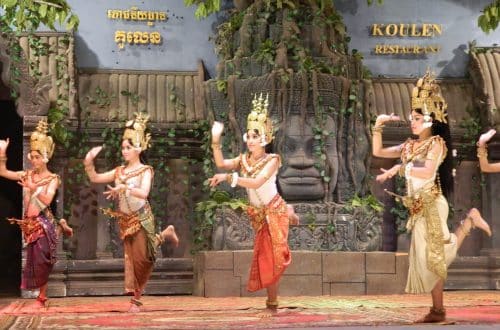