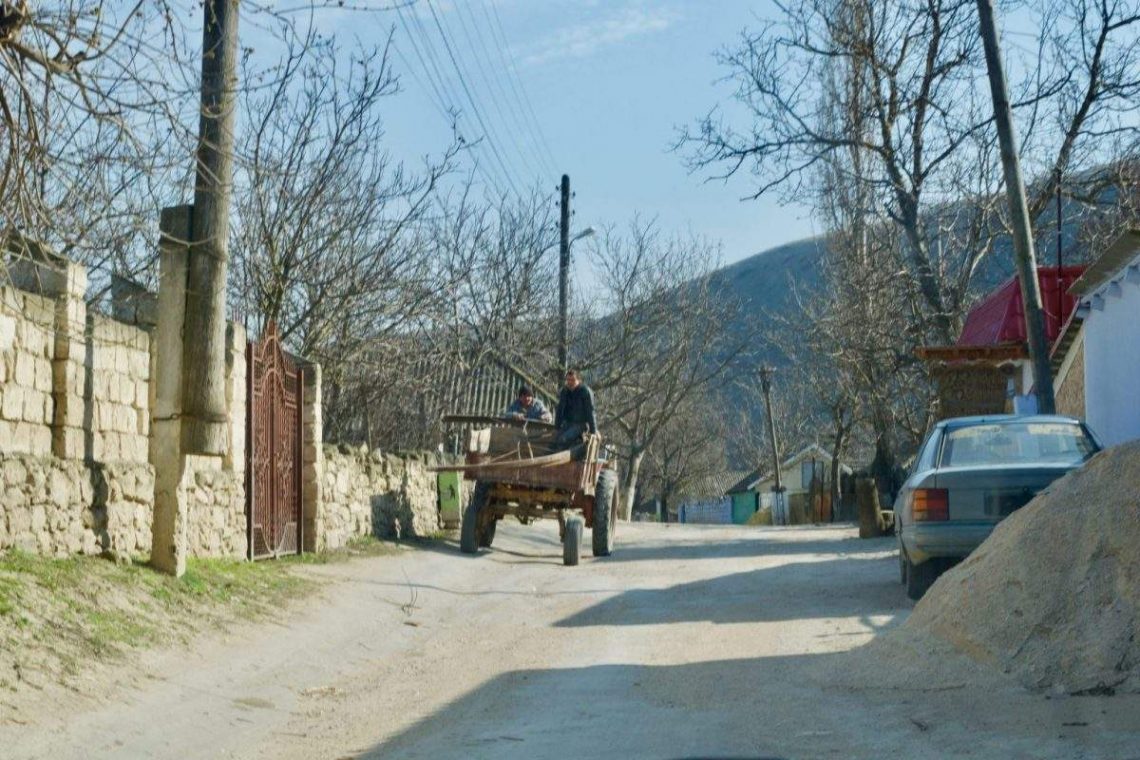 I had the opportunity to visit Moldova in March 2016.

It was a fluke, really. I was in Bucharest for work and, having already explored Romania on a previous trip, I was keen to go somewhere different. Moldova is one of those places which has fascinated me for years, in part because I was never sure if I would ever get there. Now I was getting the chance.

Moldova feels very far removed from the rest of Europe. A small nation tucked away in the far south east of the continent, sandwiched between Romania and Ukraine, many people I mentioned it to hadn’t even heard of it, let alone considered going there. “What’s there?”, they would ask. No idea. That was the point of going.

Tourist attractions in Moldova are few and far between – that’s a large part of the appeal. But there are some very worthwhile tours in Moldova if you want to explore the country. The vast majority start from the capital, Chișinău, a small city which feels a little run down in a way that’s hardly surprising for the poorest country in Europe.

Moldova today feels very like provincial Russia back in the 90s. Ragged around the edges, populated by middle-aged ladies in headscarves, it has a charm which grabbed me immediately. Adding to this charm was the knowledge that I was one of very few tourists. Apart from a pair of businessmen in my large, Soviet-era hotel, I only noticed one couple apart from myself in the three days I was there.

I spent my first afternoon wandering the city centre, exploring Orthodox churches, grey parks still emerging from winter, small markets, and statues of local heroes I had never heard of. The Moldovan parliament, literally next door to my hotel, was an anachronism; heavily policed from the front (due in part to a large protest group camped outside), the rear door beside the hotel was completely unfenced and unprotected. I was later told by Moldovans that democracy is very much a token effort at the moment, elections are rigged and tensions are high.

I did, however, discover a modern side of Moldova in the form of the Tucano coffee shops. In a country where Starbucks, Costa and other western brands are conspicuous by their absence, the presence of a chain coffee house serving the sort of unusual drinks I love to try (violet latte, anyone?) had me going back three times in two days – and I still didn’t get to try everything!

I ate the first evening in the hotel restaurant, next door to what turned out to be a public speaking class. Note for future reference: this is not a good idea. It’s hard to concentrate on your guidebook when you are being deafened by the volume projected from the next room. The following morning, I set out on a pre-booked tour. As one of the only 3 tourists in Chișinău (the Moldova tourism board has some work to do!), it was hardly surprising that I was the sole foreigner on a tour that quickly swelled in numbers: myself, guide Natalia, driver Sergei and a fourth member, trainee guide Olga who tagged along for the day. We quickly struck out east from Chisinau to Tiraspol – and the breakaway republic of Transnistria.

Transnistria, Transdniester, or the Pridnestrovian Moldavian Republic is an oddity in a corner of Europe which is already largely unknown. It came about as a product of history: when the Moldovan SSR was formed in the days of the Soviet Union, the area chosen was a large chunk of eastern Romania, plus a sliver of land to the eastern side of the Dniester river, historically part of Ukraine. Fast forward to independence, and this little slice of Slavic land, populated by Russian speakers, suddenly found itself part of a nation which was historically and culturally closer to Romania and keen to shake off the Soviet heritage. It didn’t sit well with the Transnistrians.

Today, it is a self-declared independent republic, with its own parliament, currency, passports and border control. Recognised and supported by Russia, but not by anybody else, it is sandwiched between the Moldova it is trying to escape and Ukraine, with which relations are strained at best. Legally part of Moldova to the outside world, to visit Transnistria we nonetheless had to cross a frontier and pay for visas (no passport stamps, sadly). Past the border and we were in another world.

Transnistria is not communist, but you’d be forgiven for thinking it is. If Moldova is a step back in time, it is nothing compared to Transnistria, which has clung on to its Lenin statues, House of Soviets, roubles, and ceremonial tanks in a way that would make it a major tourist attraction if, indeed, there were any tourists. We headed straight for the capital, Tiraspol, a city of wide roads, pigeons and trolleybuses proclaiming “In the future, together with Russia”. In the market, the prices are in Transnistrian roubles, which we had to exchange with Moldovan lei at the bank, and then spend before we left because they are not recognised outside the borders of the breakaway state.

Ironically, Transnistria has most of the region’s industrial might, but anything it produces carries the words “Made in Moldova”. This extends to one of its most popular exports, Kvint brandy, and some visitors travel to Transnistria just for the brandy alone. I bought a bottle – you feel kind of obliged when you’re the only foreign visitor – and to be fair, it was well worth the investment!

Shopping complete, we took a good look around the small city centre, but the pleasures were soon exhausted. As it was still late morning, my guide (who surely deserves a degree in sales and marketing) suggested an additional trip to the Orheiul Vechi monastery complex, back in Moldova proper. With lunch thrown in, I wasn’t going to say no. We set off back to Chișinău before turning north and heading into the rural areas which make up the majority of the country. If the cities are run down, you really get an understanding of the level of poverty in Moldova when you are out in the villages. Unpaved roads and ancient tractors abound.

We stopped for our lunch at a small family-owned restaurant in the village of Orheiul Vechi, close to the monastery. The traditional food in Moldova is absolutely delicious, and we had far too much for three people to eat in one sitting. Washed down with great Moldovan wine, it was worth the price of admission alone.

Finally we set off to the monastery. Orheiul Vechi is the most popular of Moldova tourist attractions, so naturally we had the place to ourselves. The monastery consists of a church built high on a bluff, and caves, still populated by monks, built into the site of the cliff face. In the Orthodox tradition they are beautifully decorated, with an awe-inspiring view across the countryside from the open doorway. However, what made the biggest impression on me was a quiet conversation between my guide, Natalia, and the monk looking after the cave we visited. I will never know what was being said, but she was clearly following up on a spiritual problem they had discussed previously. The obvious faith and sincerity from a young, modern woman, and the comfort she felt at the monk’s words, will stay with me for some time to come.

Tours to Moldova are available through a variety of companies, most of which also offer Transnistria tours. For a list of licensed tour agencies and all the best places to visit in Moldova, check out The Travel Guide to Moldova. 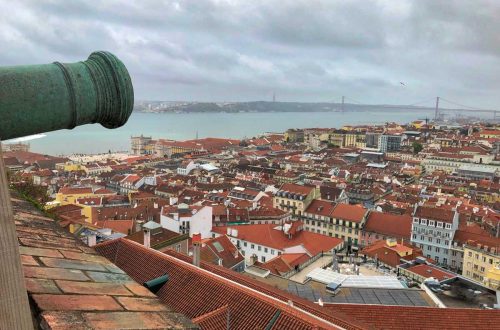 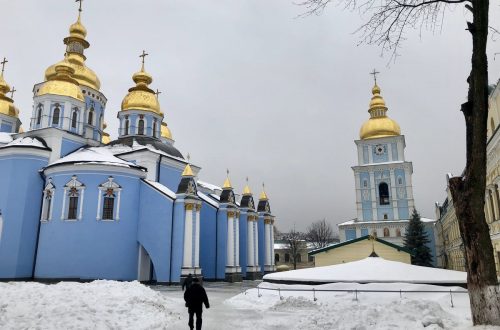 What to do in Kiev in winter: The perfect 3-day itinerary 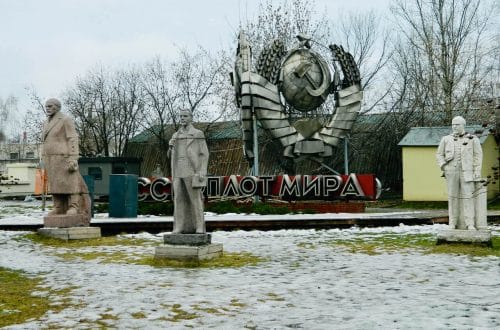 A time of change: Russia after Communism