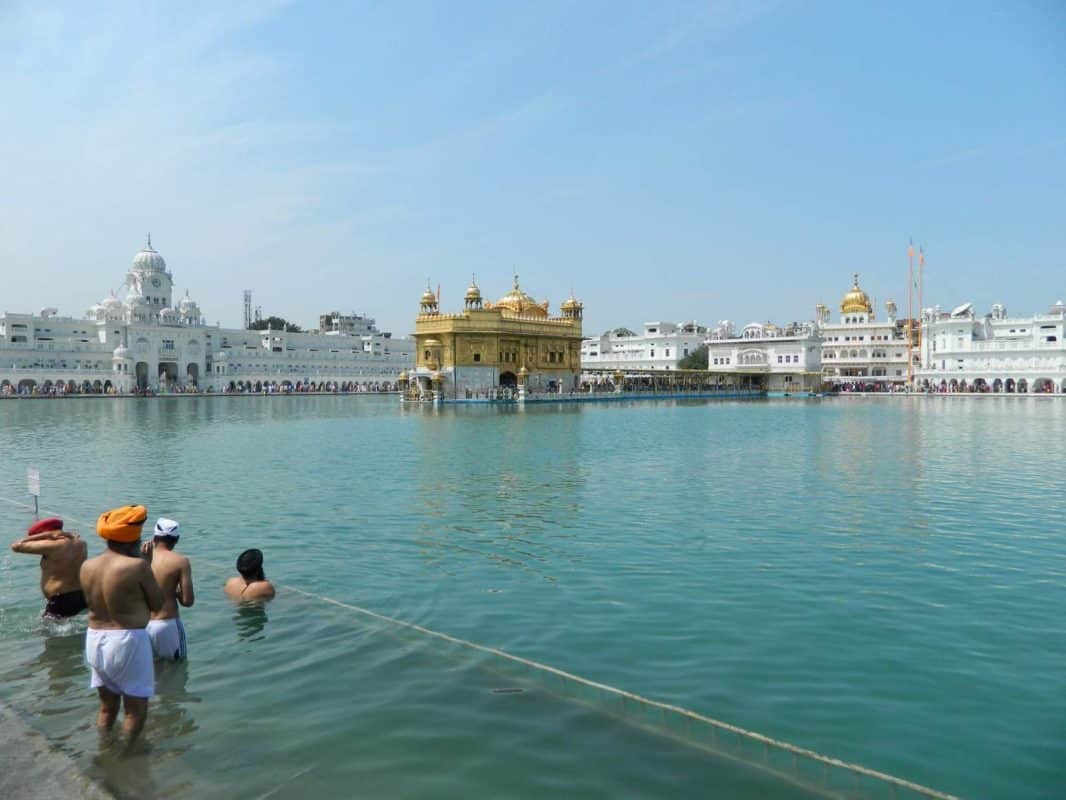 Amritsar, capital of the Punjab region of India, is a city with a character all its own. Sitting close to the border with Pakistan since partition in the 1940s, it has a large Sikh population and is home to the greatest temple in the Sikh religion. I fell in love with the city, which is a little less crazy than some others in India, a little more ordered, at least by local standards. And as a place to visit in springtime, it is blessedly cooler than the cities further south.

For a short visit to Amritsar, there are a few must-sees. You could complete this itinerary in just a day if you are pushed for time on your Indian adventure. Why not combine Amritsar with a trip to Dharamshala and Shimla in the Himalayan foothills? The city is a fantastic jumping-off point for adventures to the north!

As a British national, a visit to Jallianwala Bagh is a difficult experience. In 1919, British Indian forces opened fire on a crowd of peaceful protesters and pilgrims here, killing more than 300 and injuring 1200 more. The reason for the massacre was, nominally, because the local authorities had banned all public meetings only that morning so the gathering was seen as defiant; but the scale of the killing, and the fact that many or most of the local people involved had no idea about the ban, makes this one of the less proud moments of the British Raj.

Jallianwala Bagh today is a peaceful place to visit – or at least, as peaceful as anywhere gets in India. Monuments are dotted around the gardens, and plaques commemorate the locations where key events in the massacre took place, providing a grim reminder of what happened here. But it is not all serious reflection. During our visit we were the only foreigners among crowds of Indian visitors, and quickly became the centre of attention. Balancing a poignant visit to a memorial with posing for photos with groups of Indian students was a strange experience, but a typically Indian one. We were happy to pose and chat with the young people, the girls dressed in the traditional Punjabi salwar kameez which had replaced the saris we’d seen elsewhere in India. An emotional visit quickly became a happily memorable one as we replaced the past with the present.

The Golden Temple, properly known as Sri Harmandir Sahib, is a short walk from Jallianwala Bagh, and is the highlight of a visit to Amritsar. First built in 1589, although the current building dates from 1809, it is the holiest place and most important pilgrimage site in Sikhism.

The temple itself, gilded in 1830, is part of a huge white marble complex which swirls with people even on a normal day. Pausing outside, we removed shoes and donned head coverings before entering. If you haven’t brought anything with you, you can rent headscarves, or even buy a bright orange souvenir scarf to use during your visit. Never one to resist a tacky souvenir, I went for the orange. With blond hair and fair skin I was always going to look like a tourist anyway, so I might as well enjoy it.

Before entering the temple, everyone is expected to wash hands and feet in the sinks close to the entrance. And then you are through the archway and into the temple itself. The complex is huge, with buildings forming an enclosed rectangle at the centre of which is an enormous tank, or water pool, where the faithful (generally only the men) bathe. And at the heart of the pool, on an island connected on one side by a causeway, stands the Golden Temple itself. It is a breathtaking sight.

Apart from wandering the temple complex, meeting the local people and soaking up the atmosphere, there are two main activities for the non-Sikh visitor to experience. The temple is famous for serving a meal to anyone who wants one – regardless of religion or income – so my companions headed to the dining hall to check this out. However, I decided to join the queue of pilgrims, both Sikh and otherwise, queuing across the bridge to enter the Golden Temple itself. The draw is to see the Guru Granth Sahib, the Sikh holy book, which is held in the temple and revered by Sikhs worldwide. The book is read continuously in a melodious chant, from dusk till dawn, until it is put away for the night in a ceremony which takes place every day of the year. The next morning the processed is reversed, as the book it brought out for another day. It can take 2-3 days to chant the entire book from cover to cover.

The queue across the causeway was 7 or 8 people wide and quite long, and being somewhat claustrophobic I hesitated at first to join it. However, waiting was a joyful experience. The crowd were there to pray, and waited patiently, with none of the crush I was expecting. And there is no more incredible place in which to wait, soak up the atmosphere and admire the intricate decorations of the temple. A religious ceremony was taking place close by, and the sounds of prayer floated across the water as we waited.

And then we were inside, overwhelmed by the craftsmanship of the temple and the magical sound of the book being chanted by the gurus. We progressed through the small building, up stairs lined with elaborate decorations, and past the great book itself. Although I am not religious, I was acutely aware of the privilege of being in this location, having this experience that would be a dream for millions of Sikhs worldwide. It is one of the awkward truths of travel that those of us from affluent countries get to have experiences which would mean far more to others. It’s something I try very hard to respect and appreciate; but in any case, on this occasion it was impossible not to be moved by the sanctity of the moment.

Eventually, emerging onto the temple roof, we had a panoramic view of the temple complex and a chance to examine the gold leaf gilding of the temple from up close. It was a magical experience, and the Golden Temple is easily one of the highlights of any of my trips to India.

The other highlight of a trip to Amritsar is that it’s a gateway to the Wagah Border between India and Pakistan. You might have heard of this border crossing already, as it has become world-famous. Situated roughly halfway along one of the world’s more volatile borders (for those not in the know, the nation of Pakistan was created in 1948 by the British government in an attempt to separate the Muslim and Hindu communities in this part of their former empire; partition was bloody, unpopular, and a disaster in which many people lost their lives and families were split apart), the Wagah crossing is a beacon of light and life. Every night at sundown, crowds gather on every side of a set of gates to watch the ceremonial guards posturing, and the flags lowering, as the border closes for the night.

The border checkpoint at which all this takes place is, of course, not the same checkpoint that vehicles actually use to cross between the two countries. It is still, however, the legal border, and crowds on either side have a clear view of each other through the towering iron gates. I joined the crowds on the Indian side, seated in the compulsory foreigners’ area. The Indian side of the border is a riot of colour and noise. Girls in colourful saris dance to Indian pop music, as the crowd cheers them on and the border guards, in khaki uniforms with over-the-top red-plumed helmets, march, stomp and high-kick their way through a display intended to show power and might to the opposition.

All this posturing is, of course, for show, and exactly the same performance is taking place on the other side of the gate. The Pakistani guards, in matching outfits but this time in a suitably menacing black, go through the same ceremony, egged on by their own highly partisan crowd, who have made the trip from nearby Lahore. At the time I thought the Pakistanis, in their shalwar kameez and hijab, were more restrained than their Indian counterparts, but I’ve since learned this is purely because the sound was muted by the wall that runs along the border. Exactly the same party is going on in Pakistan. Soon the traditional shouts begin to see who can make the most noise. “PA-KI-STAN!! PA-KI-STAN!!” rings out from the other side of the gate. And of course, I join in with the reply from the Indian contingent: “HIN-DU-STAN!! HIN-DU-STAN!!”.

The climax of the event is a high-kick-off between the Indian and Pakistani guards at the border itself, before the gates are closed and the flags diagonally past each other. Great care is taken to synchronise the lowering so that neither flag gets there before the other one. Then the parties on both sides wrap up, and the joyful crowds wend their way back to Amritsar and Lahore respectively. It’s definitely one of the world’s strangest borders, tinged as it is with both danger and comedy (behind the ceremonial guards practising their high kicks, we can see armed soldiers in the distance, reminding us that this is a serious border which is strongly contested further north). But as a spectacle, it really can’t be beaten.

Enjoyed “Amritsar: the jewel of the Punjab”? Pin it! 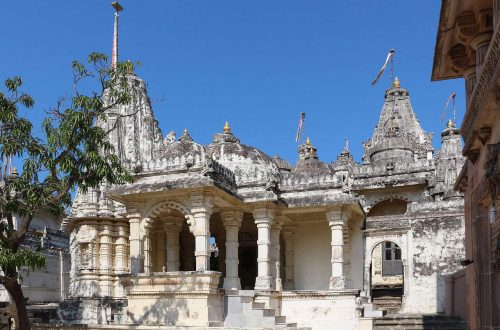 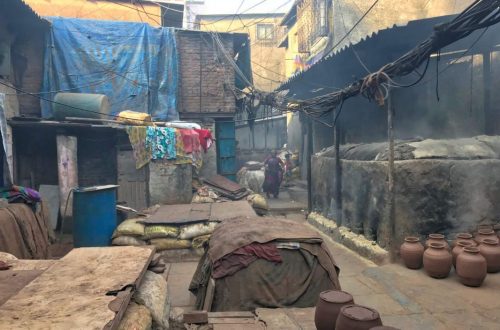 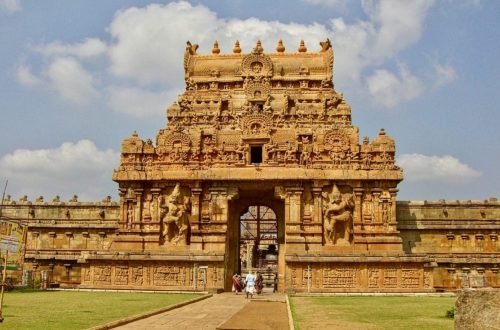