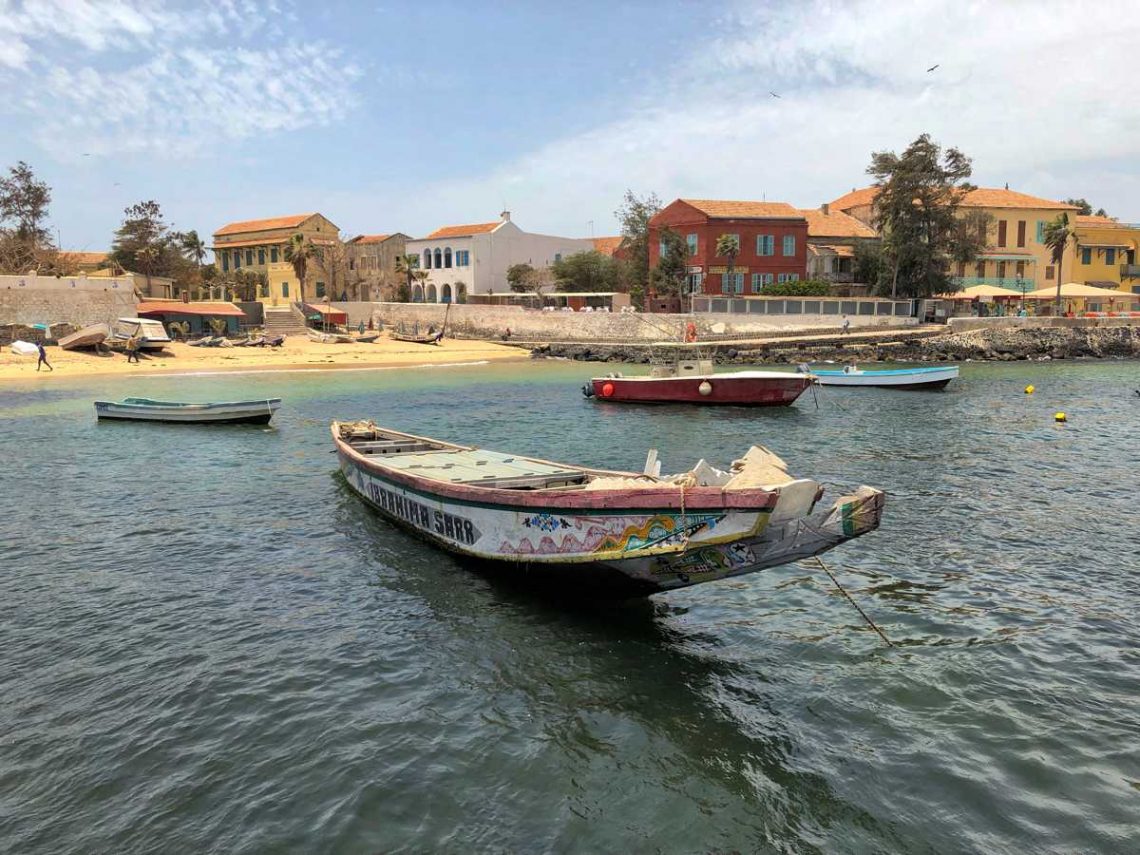 Located a short ferry ride off the coast of the capital, Dakar, Goree Island in Senegal is a world apart.

Discovered in 1433 by the Portuguese (although presumably known to the Senegalese far earlier), the island was initially named Palm Island for the number of palm trees found here. Today Gorée is a car-free haven from the bustling Senegal capital city, with a population of some 1800 people, many of whom still work as fishermen, while others work in the tourist industry or take the ferry each day to work in the capital.

Today, Gorée is a UNESCO World Heritage Site, and with good reason. Discover an island village of quaint streets, colourful flowers, swaying palms and a tragic past as you explore Gorée, where daily life is played out against a backdrop of one of the worst atrocities every committed. But a visit to Gorée is also about the friendly people and laid-back island life, and is a perfect day or overnight trip from Dakar.

Getting to Goree Island

The Dakar ferry to Gorée leaves from the Gare Maritime Internationale de Dakar, located on Boulevard de la Libération, close to the main railway station and Dakar port. Tickets for foreigners cost considerably more than those for Senegalese nationals for the same journey – however, note that wages in Senegal are very low and this dual ticketing system keeps the ferry affordable for locals whilst bringing in the money needed to run it. In April 2019 the fare for foreigners was 5200 FCFA for adults, 2700 FCFA for children.

Ferries are relatively comfortable, with hard seating upstairs and more comfortable seating downstairs. However, the boat is still basic; no refreshments available, although there is a toilet. The ferry leaves every 1-2 hours from 7am; crossing time is approximately 20 minutes, with splendid views as you approach the island.

You will first set foot on Gorée at the main jetty. Approaching is a joy: colourfully-decorated fishing boats dot the harbour and lie pulled up on the beach, while the surrounding buildings are the epitome of French colonial charm. Painted in shades of yellow, pink and white, the houses on Gorée go back as far as the 17th century and even earlier, and it is wonderful to stroll the well-paved streets lined with bougainvillaea as you watch local life all around you.

What to see on Gorée

Gorée Island has a number of key sights to see, and these can easily be visited in a few hours.

Dating from 18th century, the Slave House (Maison des Esclaves) is the undisputed must-see and the reason most people come to the island. Originally built by mullato local woman Anne Pépin, this building is typical of the many slave houses that used to exist on Gorée.

For four hundred years, people from all over West Africa were brought here as a last stopping point before sailing for the America. Between 100-200 prisoners were held here at any one time, men, women and children; all were housed separately in small cells where up to 20 prisoners at a time were manacled and left to sit on the stone floor for up to 3 months before they set sail for the New World. Slaves were well fed to increase their weight and therefore their selling price, but the food was not high in quality; meanwhile, the hot and crowded conditions led to yellow fever and other illness which killed many slaves before they even left their mother continent. It is estimated that, over the 400 years of slavery in West Africa, some 6 million people perished in Gorée’s slave houses.

A visit to the slave house is a sobering one. Enter the cells and imagine how it felt to be held there, day after day, in often blisteringly hot conditions and squeezed in with large numbers of fellow slaves. Check out the tiny, low-ceilinged cells where troublemakers were held, up to eight at a time in a tiny, low-ceilinged hole; and check out the doorway of no return, where prisoners passed through as they left Africa forever.

The upstairs of the slave house was designed as a guest house and accommodation for the slave traders. Light and airy, the contrast with the cells below couldn’t be more poignant. The upstairs room now houses a museum with information on the Senegal slave trade and displays of shackles and other items. Note that all the display material is in French.

The Liberation from Slavery statue

This powerful statue of two people embracing as their chains are released is located close to the Slave House. The statue was a gift from the people of Guadeloupe, which has a strong slave heritage, to their brothers back in the homeland of Africa.

Situated in an old fortress at the northern end of the island, the IFAN Historical Museum is hard to miss as you approach Gorée from the sea. The museum uncovers island life since 5th century, including ancient cultures, the resistance against colonial rule, and of course the slave trade. The museum is (at least in theory) open Tuesday-Sunday from 10:00-17:00.

The island’s church occupies an imposing position in one of the central squares of the island. The interior of this tall building is very much that of a local church, with representations of the Stations of the Cross and plaster statues to various biblical figures.

Walking towards the south of the island, a series of gentle steps climb up the hill towards the Gorée Memorial. On the way, you will pass a souvenir market as well as a number of artists selling canvas prints of good quality. Local purchases on Gorée includes prints, scarves and fabrics, wood carvings, sand artwork, and inexpensive jewellery; sellers can be persistent, but are friendly. Haggling is almost always expected, but do remember that this is these people’s means of earning a living, and don’t get carried away negotiating a price which is far less than you believe the item to be worth.

Continuing up the hill, you will pass the remains of a bunker which was used by forces loyal to the Vichy French government during World War 2. Now in ruins, it is easy to see the great defensive position provided by Gorée during times of conflict.

The Gorée Memorial is located at the very top of the hill. Check out the two enormous cannons which were last fired in 1942; with a range of 14 kilometres, the cannons were capable of firing well beyond the Dakar city limits. After WW2, the ends of the barrels on both cannons were deliberately sabotaged to ensure that they couldn’t be fired again, and today the cannons point inland, in the opposite direction to their original position pointing out to sea.

Where to eat on Goree

The majority of the restaurant on Gorée are located close to the jetty, and sell a similar variety of dishes. Expect to find salads and light options, as well as main courses which focus heavily on different preparations of local fish. Meat-lovers are also well catered for, but options will be limited for vegetarians, although the restaurant we visited was happy to prepare a meal of vegetables and rice on request. Expect to pay anywhere between 3500 and 8000 FCFA for a main course.

Where to stay on Goree

Most visitors to Gorée come for a day trip and take the evening ferry back to Dakar. However, there are several small hotels on the island enabling you to make an overnight stay. Rooms are a little on the shabby side, but basically clean and with air conditioning. When we stayed, water availability was an issue; water pressure is also not great, so be prepared.

The payback for accepting a few limitations is the joy of spending a night on a beautiful island after most visitors have long since headed back to the city. Breathe in the island with only the locals for company: I guarantee you will truly feel like you have entered another world. 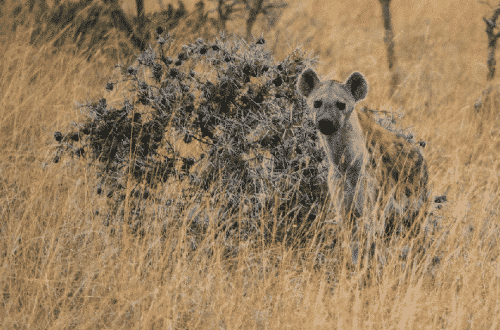 Animal encounters: Hyenas in the night 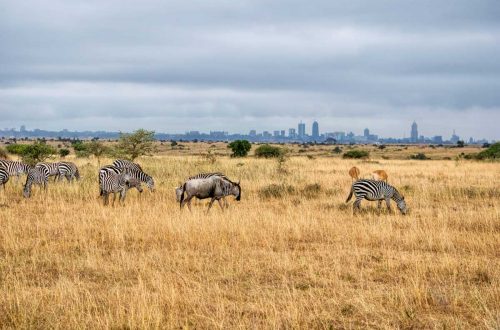 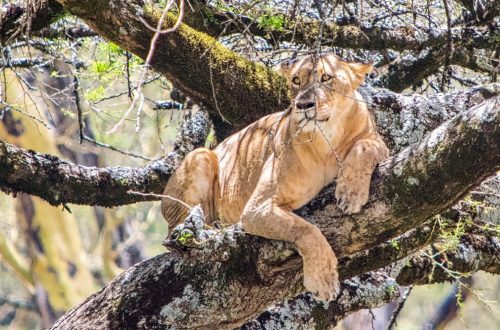 The lion that climbed the tree: Life on the plains of Kenya