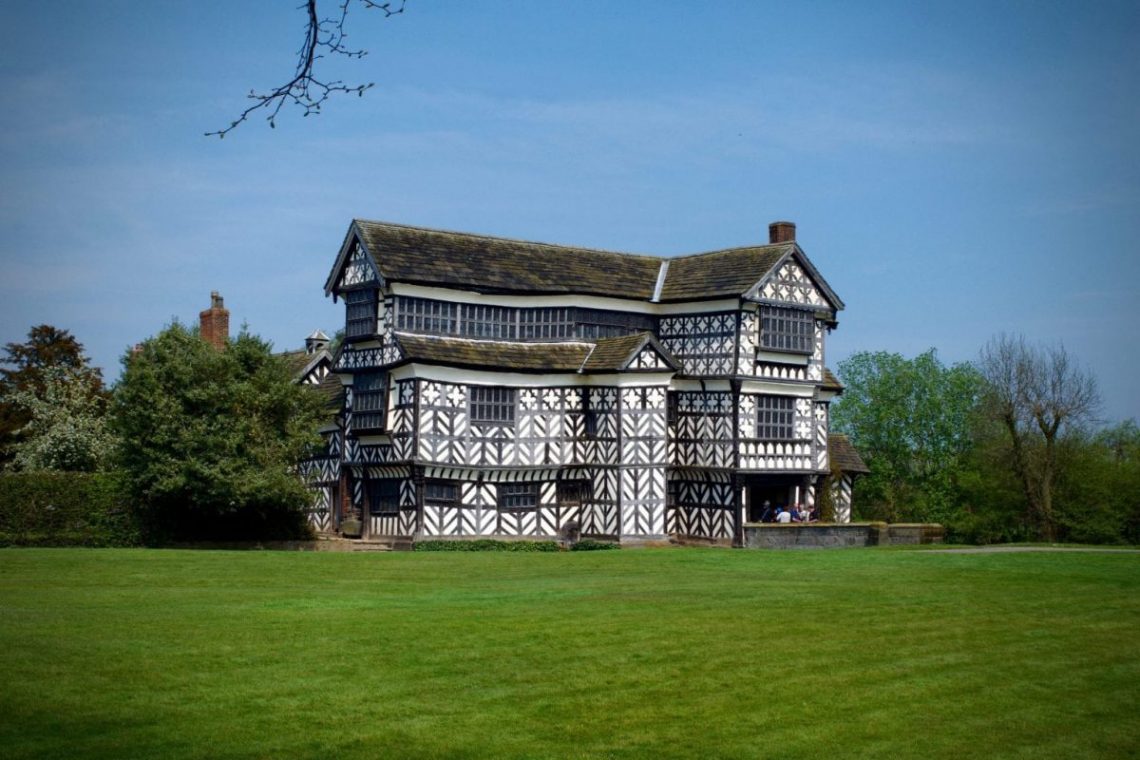 Few periods of European history have quite the splendour and mystique of Tudor England. The age of Henry VIII and his six wives, of Bloody Mary and Elizabeth I, the period is known for its violent history and religious upheaval, set against a backdrop of elaborate fashions where doublets, hose and ruffs were the order of the day. But the period is also known for its distinctive architecture, and Little Moreton Hall in South Cheshire is a spectacular example.

A traditional half-timbered manor house, Little Moreton Hall was not the home of a prince or courtier, but rather that of a well-to-do local family who lived in genteel middle-class prosperity. As a result, it gives a fascinating glimpse into the everyday life of the period.

Little Moreton Hall is owned by the British National Trust, and is located on the A34 a few miles south of Congleton in Cheshire, within easy reach of Stoke-on-Trent and Manchester. Surrounded by farmland where sheep graze in a typical English pastoral scene, the house is imposing as you round the corner and glimpse it for the first time. Set amongst lawns, the Hall is a higgledy-piggledy building in traditional Tudor black-and-white half-timbered style, its eccentric lines the result of centuries of movement in the wooden-framed building. Entry to the building itself is across a formal moat and through an archway into a cobbled courtyard.

The Hall is entirely open to visitors, with each room containing displays of Tudor life and explanations of the architectural features and furnishings of the period. From the ground floor kitchens, dining room and chapel, visitors can head upstairs to bedchambers, period costumes and an original Tudor toilet – a long drop hole in the floor, opening straight into the moat below! The top floor of the building is a Great Hall which was added later, the weight of which is largely responsible for the amount of warp the building has suffered over the years. Walking over the uneven floor and learning about the metal pinning that makes it safe today is almost as interesting as experiencing the Tudor rooms below.

Outside, the rear of the building has a pleasant footpath along the moat, and a formal Tudor knot garden complete with yew hedges. On a summer’s day, events are held frequently, including music and costumes of the period, and Tudor games for the children. Shakespeare’s plays are performed here every summer, with performances in the central courtyard surrounded by half-timbered elegance. It makes for a spectacularly authentic setting.

Little Moreton Hall is open from February to October, plus a 3 week Yuletide celebration in December, and is free to National Trust members. Check the National Trust website for opening days and times, which can vary throughout the year. Non-members pay an entrance fee of £10 adults/£5 children (December 2017), which gives access to the whole house and gardens. The property also has a tea room and gift shop.

Enjoyed this post about Little Moreton Hall? Pin it!