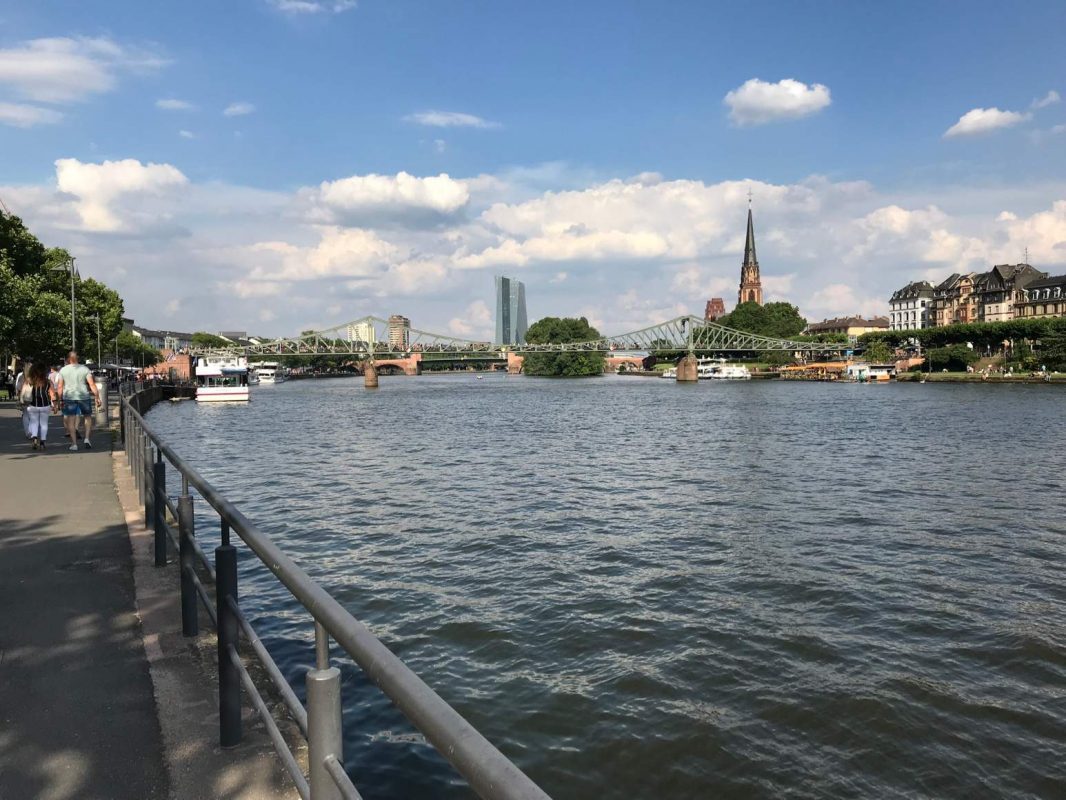 Frankfurt. It’s a German city which many have heard of, but which is often overlooked by visitors in favour of the more popular cities of Berlin and Munich to the south and east. But this historic, dynamic city offers a treasure trove of little-known sights to the visitor who takes the time to stop. One of the airport hubs of Europe, a long layover in Frankfurt gives you ample opportunity to experience something of this European business mecca – or why not tag a city tour onto the beginning or end of your German vacation? However you do it, spending a day in Frankfurt will open your eyes to Germany’s rich history, and potentially even richer future.

If you are wondering what to do in Frankfurt in one day, look no further! My day in the city started with an overnight stay and ended back at the airport for my onward journey, but you could just as easily do this as a layover or at the start of your trip. My itinerary is ideal for those arriving in the city at Frankfurt Hauptbahnhof, the main railway station with direct links to the airport.

Stroll from the station to the Hauptwache for breakfast

Setting off from Frankfurt Hbf main station, Kaiserstraße will take you directly into the heart of the city. The street is not at its best near the station, although it is safe in daylight hours, but a few minutes’ walk will quickly bring you to soaring glass-and-chrome skyscrapers as you cross Gallusanlage park and the financial district. Keep walking until you reach Goetheplatz and Roßmarkt, dominated by a statue to Gutenberg, printer and publisher extraordinaire of the 15th century, best known today for bibles and online free downloads! From the statue, keep walking until you reach the Hauptwache. Here in this modern plaza you will find several restaurant and coffee houses, both local and international chains, perfect to stop for a breakfast of coffee and cake. Outdoor seating is available in the warmer months; take the opportunity to check your maps and guidebooks to check out what you will be seeing later!

To the south of the square, St Catherine’s church towers over the downtown area. Heading past it (or stop for a look inside!), your next destination is St Paul’s Church (Paulskirche), which stands on the edge of Frankfurt old city. Construction of the original church was begun in 1789, the same year as the French Revolution, and it was in St Paul’s church that the first freely-elected legislative body in Germany, the Frankfurter National Assembly, met in 1849. Destroyed by the Allies in World War II, like much of the old city, the church has been reconstructed and is now used for ceremonial purposes. But the chimes of the church clock still add atmosphere to the old town area.

Close by St Paul’s Church, Römerberg is the hub and jewel of Frankfurt old town. Also destroyed during WWII but since lovingly rebuilt, the square is surrounded by classic German architecture including Frankfurt City Hall. The town square is filled with restaurants which spill out onto the square on a summer’s day; in December, Römerberg plays host to the Frankfurt Christmas Market. But even on a less picturesque occasion, the visitor can’t help but be dazzled by the stunning, chocolate-box architecture and buzz of the square.

The double-decker Frankfurt sightseeing bus departs from the street between St Pauls Church and Römerberg if you feel like taking the weight off your feet – or if the German weather thwarts yours plans for the day!

A short walk eastwards through narrow, picture-perfect streets takes you to Domplatz and the Imperial Cathedral of St Bartholomew. This Roman Catholic Church, built in the Gothic style, was also gutted by fire during World War II (spotting a theme here?), but extensive restoration makes it hard to imagine. Ornately decorated inside in the Catholic tradition, and a stark counterpoint to some of the plainer Lutheran churches of the city, it is well worth a look inside. Entrance is free, or visit during one of the concerts or church services for added atmosphere. The cathedral is filled with statues and other artwork which will dazzle the visitor.

By now, lunch is on the cards. There are many restaurants around the Altstadt, or Old Town. I ate on Römerberg, at Weinstube Im Römer, which serves traditional Frankfurt specialities washed down with German wine and beer.

Cruise on the Main river

After lunch, digest your food the easy way with a leisurely river cruise on the Main (pronounced “mine”) River. Boat tours depart just south of Römerberg, close to the Eisenersteg iron bridge, and 1 and 2-hour tours are available. As of June 2018, the shorter cruise cost €9.80 and the longer cruise €12.80; I took the shorter option due to limited time. Food and drink is available on board; note that the cruise takes a figure 8 loop, so the half-cruise may go up or down river depending on the time you pick. Ask at the counter if you have a preference.

For more information, check out www.primus-linie.de.

The Eisener Steg iron bridge close to the cruise departure point was originally built in 1868 and is one of Frankfurt’s landmarks. Pedestrian-only and accessed by steps (lift available), the bridge takes you across the river to the wealth of world-class museums on the Main’s southern bank. If you have more time in the city, you will not be short of things to do.

The bridge was replaced by the current version in 1912, but again, was blown up (on this occasion by the Wehrmacht) in the final days of WWII. It was reconstructed in 1946.

Museum Judengasse and the Wall of Remembrance

Fully rested, it’s time for a short walk (around 15 minutes) to the museum of Frankfurt’s Jewish ghetto. The city’s Jewish population was decimated under the Nazis, and the Museum Judengasse (Battonnstrasse 47) recalls what life was like for Frankfurt’s Jewish inhabitants from the district’s inception in 1460 until the days of the Final Solution. The museum is closed on Mondays; entrance for adults cost €6 in June 2018. https://www.museumjudengasse.de/en/home/

The museum’s entrance lies directly next to Frankfurt’s old Jewish cemetery, where many gravestones still lie flat since they were placed that way for protection during the war. Entrance to the cemetery is by permission only as the gate is kept locked, but it is possible to peek inside. The length of the cemetery wall on Battonnstraße has been dedicated as a Wall of Remembrance (Wand der Namen) for those Jews killed in the Holocaust who were born in, or otherwise had a connection to, Frankfurt. About midway along the street can be found the names of Annelies (Anne) Frank, her sister Margot and mother Edith; Anne and Margot were born in Frankfurt and lived there until the family escaped to what they hoped would be a safer life in Amsterdam. Their memorials are easy to find as the blocks are arranged alphabetically; many have stones placed on them in the traditional Jewish mark of respect.

Zeil, the main shopping street of modern Frankfurt, is a short walk from the Jewish cemetery and catapults you back into the 21st century. Pedestrianised and lined with every imaginable shopping opportunity, it also plays host at its eastern end to an outdoor market filled with fresh produce, tempting hot food stalls and bars aplenty. It makes a great alternative to the Old Town as a lunch option if you prefer to eat later. Check out erzeugermarkt-konstablerwache.de.

Frankfurt Stock Exchange and the Bull and Bear

Heading back now in the direction of the station, just north of the Hauptwache you will find the Frankfurt Stock Exchange. A beautiful building in its own right, it is more famous today for the Bulle und Bär (Bull and Bear) bronze statues that stand guard outside. Symbolising the ups and downs of the stock market, they have become icons of the city.

Continuing towards the station via Goetheplatz, with its statue of the great writer himself, it is time to head firmly back into the present and future of Germany. The European Central Bank is the home and birthplace of the Euro, the currency which entered circulation in 2002 and has since become the common currency of much of Europe. The bank itself sits amongst shiny modern skyscrapers; on the plaza outside, look for the EU stars decorating the pavement, as well as the huge € sign which is a perfect photo opportunity!

From the European Central Bank, you are a 5-10 minute walk from Frankfurt Hauptbahnhof main station, for your return trip to the airport.

Where to stay and where to eat

For this itinerary, I would recommend staying in one of the hotels close to the main station. I arrived in the evening and stayed at the Mercure Frankfurt City Messe, which was affordable but with the certainty of an international chain.

The area around the station has a wealth of restaurants, many of them Asian. I enjoyed the all-you-can-eat sushi at Yaomi Japanese restaurant close to my hotel. Like the areas around stations the world over, the area is safe by day but may be more threatening at night; however, for affordability and convenience, it is a great location.

My recommendations are not sponsored.

Getting to and from the airport

Getting from Frankfurt airport to Frankfurt main station couldn’t be easier. Local trains run roughly every 15 minutes and cost €4.90 one way as at June 2018. Look out for the S8 and S9 trains which both run the same route in both directions.

High-speed trains also run the same route but are much more costly.

Thinking of spending one day in Frankfurt Germany? Want to remind yourself what to do in Frankfurt in one day? Pin this post for later! 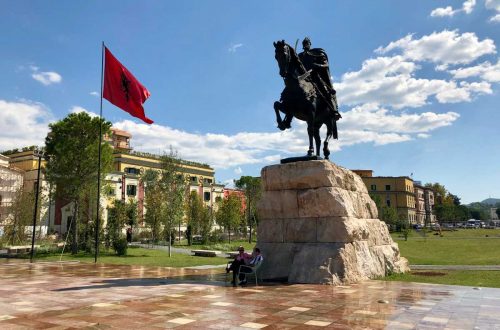 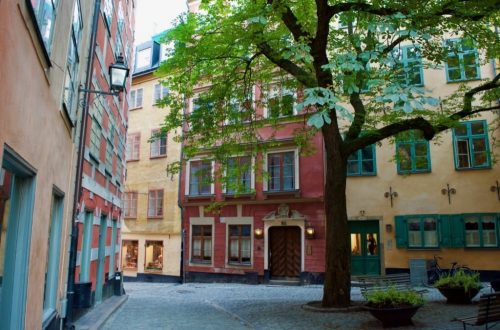 The gentleman in the Stockholm café 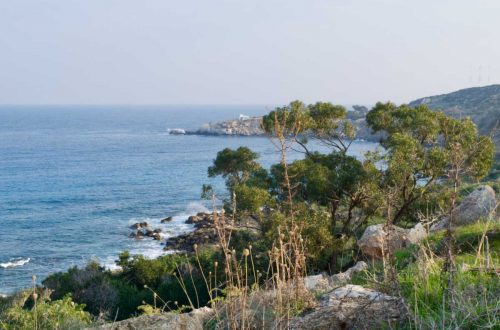